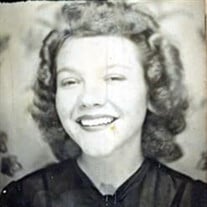 Choctaw, Oklahoma Yutella L. Shoop, 85, of Choctaw, Oklahoma transferred citizenship from this life to a greater life, December 21, 2015. She was born October 10, 1930 in Speer’s Ferry, Virginia to parents George and Fannie Scalf and grew up in Exeter, Virginia with her four brothers SM, Monk, Scott and Jim. Yutella married Robert Shoop after he returned from World War II, then moved to Dayton, Ohio where they built a life together for forty-five years. 1952 saw the birth of their only child, Sharon Lee. Yutella was an accomplished executive secretary for E.F. MacDonald Company for over forty years, a long-time member of the United Methodist Church, and greatly loved and respected by co-workers, friends and especially family. She is survived by her daughter and son-in-law, Sharon and David Behnken of Choctaw, Oklahoma, five grandchildren, fifteen great grand-children, her brother and sister-in-law, Jim and Burnell Scalf of Appalachia, Virginia and many other extended family members. The family will receive friends from 11 am to 1 pm Wednesday, December 30, 2015 at the Roy A. Green Funeral Home with services conducted at 1 pm in the Funeral Home Chapel conducted by John Tull. Interment will be held in Powell Valley Memorial Gardens in Big Stone Gap, VA. Family and friends will serve as pallbearers.

The family of Yutella L. Shoop created this Life Tributes page to make it easy to share your memories.

Send flowers to the Shoop family.