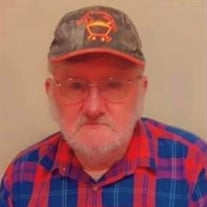 Coeburn, Virginia Roy M. Sexton Sr. of Coeburn, VA departed this life on February 17, 2022, into the portals of glory. He was preceded in death by his loving wife of forty-nine years Martha A. Sexton, his parents Lacey and Doris sexton, seven... View Obituary & Service Information

The family of Roy Monroe Sexton Sr. created this Life Tributes page to make it easy to share your memories.

Send flowers to the Sexton family.