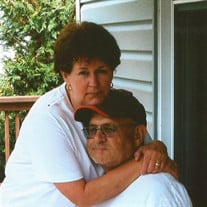 Rodney L. Aistrop, 71, went home to be with Jesus on Tuesday (May 17, 2016) at his home, surrounded by his family and loved ones. Rodney was a long time member of the Appalachia Pentecostal Church in Appalachia. He retired from Coal Mining after 31 years. Rodney was a lifelong Appalachia Bulldog fanatic, Colts and San Francisco Giants fan. He loved collecting old Western memorabilia and restoring old bicycles. He spent Wednesdays and Saturdays with his collectables setting up his buddies at the flea market. Most of all, Rodney loved being a witness for our Lord and Savior, and being a loving husband, amazing father and grandfather. Up until his last moments, Rodney would say, “I am BLESSED!”. Surviving are his “baby” wife Phyllis Aistrop of 46 years of Appalachia, VA; three daughters, Christie Aistrop of Big Stone Gap, VA, Mistie Aistrop-Vanhook and husband, Andy Vanhook of Weyers Cave, VA, and Tiffany Aistrop and husband, Eric Collier of Weyers Cave, VA. Two grandsons, Koby Crist and Michael Collier, four granddogs and his dog, Charlie. Rodney enjoyed spending time restoring his bicycle and working on his antiques with his best friends, who are his two surviving brothers, Bige and wife, Judy and Barry and wife, Bobbie Aistrop; two precious sisters, Dana and late husband Frank Ball and Geneva and husband Ralph Hamilton all of Big Stone Gap, VA; one brother-in-law, Sonny Herron, three sister-in-laws, Dollie Moore, Brenda Caudill and Betti Aistrop; several nieces, nephews and cousins. Awaiting him in Heaven, is his four babies and four grandbabies that were taken before birth; his parents, Winnie and Everette Aistrop, his mother and father-in-law Homer and Nellie Herron, two brothers, William and Darrell Aistrop and one sister, Sheila and husband Ralph Kilbourne. Please join us in celebrating this great man’s life at Appalachia Pentecostal Church, Thursday, May 19, 2016 from 6-8pm with Dr. Roy Smith. We will say farewell to our angel at Powell Valley Memorial Gardens, Friday, May 20, we will gather at Appalachia Pentecostal Church at noon to travel with him. His pallbearers will be Daddy Rodney’s Jon Clark Teglas; nephews Everette Aistrop, Ronnie Aistrop, Tony Aistrop, Barry Aistrop; cousin Johnny Aistrop.

Rodney L. Aistrop, 71, went home to be with Jesus on Tuesday (May 17, 2016) at his home, surrounded by his family and loved ones. Rodney was a long time member of the Appalachia Pentecostal Church in Appalachia. He retired from Coal Mining... View Obituary & Service Information

The family of Rodney L. Aistrop created this Life Tributes page to make it easy to share your memories.

Send flowers to the Aistrop family.