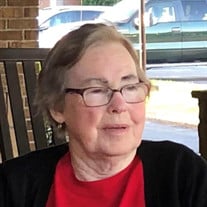 Big Stone Gap, Virginia Mary Lou Clark 78 passed away peacefully on Sunday August 22, 2021 at Ridgecrest Manor Nursing and Rehabilitation Center in Duffield, VA. Where she has been a resident the past two years. Mary was born on March 15... View Obituary & Service Information

The family of Mary Lou Clark created this Life Tributes page to make it easy to share your memories.

Send flowers to the Clark family.